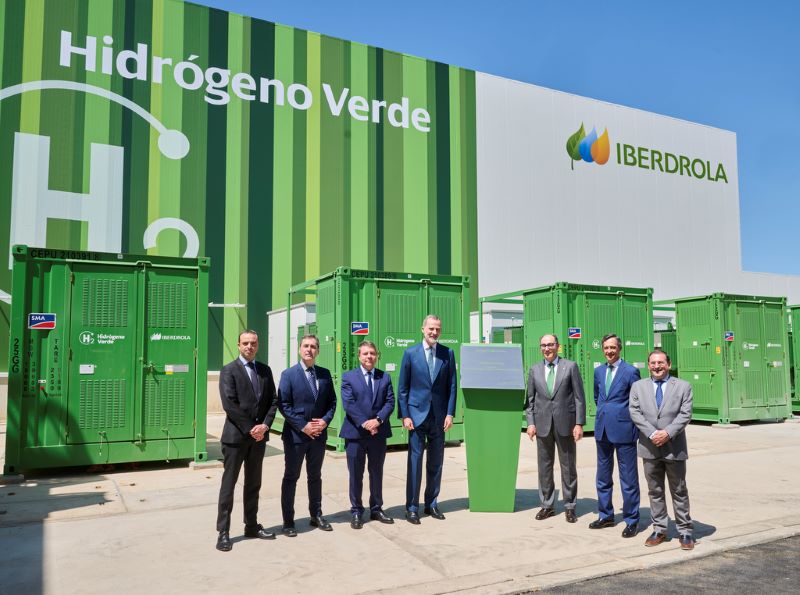 As the largest facility producing the clean fuel for industrial use in Europe, Puertollano will see Fertiberia become the first fertilizer company on the continent to benefit from renewable hydrogen’s potential on an industrial scale.

With a total investment of €150 million, the project will produce up to 3,000 tons of renewable hydrogen per year. This will save a total of 78,000 tons of CO2 emissions annually and reduce the plant’s natural gas requirements.

Supplied by manufacturer Nel, the 20-megawatt (MW) PEM electrolyser is one of the largest in operation in the world. The full project also includes a new 100 MW solar PV plant (to generate the renewable electricity required) and a 20 MWh lithium-ion battery storage system.

State-of-the-art bifacial modules have also been installed in the solar plant, which allows for higher energy production. This innovative design will enable the production of 156,000 MWh of electricity annually, equivalent to supplying clean energy to more than 47,000 homes.

Ignacio Galán, CEO and Chairman of Iberdrola, and His Majesty King Felipe VI of Spain, officially marked the completed construction on May 13th.

Speaking at the event, Mr Galán highlighted that the Puertollano project was part of the company’s strategy to invest in “all technologies that contribute to the decarbonization of the economy and increase energy independence“. Mr. Galán also expressed his confidence that public administrations would continue to offer their full support “to ensure Spain continues to be a leading country in sectors of the future, such as renewable energy and renewable hydrogen, benefitting from the industrial opportunities created.“.

Iberdrola is also at the initial stages of developing a “green heat network” for the town of Puertollano, which could utilise the residual heat produced in the plant during the electrolysis process, also enabling energy circularity and efficiency.

Renewable hydrogen offers tremendous potential to decarbonise sectors that are difficult to electrify, such as fertilizer production. Switching from fossil-based gray ammonia to “renewable” ammonia drives down farming’s carbon footprint and enables more sustainable food production. But renewable hydrogen can also play a significant role in decarbonising other applications. This is the case for high-temperature industry, and heavy-duty transport.

The commissioning of the Puertollano plant represents the first phase of a plan agreed by both companies, which will see the development of 800 MW of renewable hydrogen production facilities between now and 2027, with a total investment of €1.8 billion.

Globally the Iberdrola Group is developing more than 60 renewable hydrogen projects. This includes two of the largest in the UK through ScottishPower, at Whitelee Windfarm near Glasgow, and the Cromarty Hydrogen Project located to the north of Inverness.