It aims to help decarbonise industry in the Dutch-Flemish North Sea Port cluster, one of the largest fossil hydrogen consumption centers in Europe. Current demand for fossil hydrogen in this cluster in industries such as chemicals, fertilizer and steel production is around 580.000 tonnes. SeaH2land could replace about 20% by renewable hydrogen.

Large offshore wind – renewable hydrogen projects like SeaH2Land, which could be online by the end of the decade, could make a decisive contribution to the European Union’s decarbonisation goals.  “As the world looks to decarbonise, it’s paramount that we act now to secure the long-term competitiveness of European industry in a green economy,” said Martin Neubert, chief commercial officer and deputy group CEO at Ørsted.

Companies that support the SeaH2Land vision are calling for the EU and national governments to create a clear enabling framework for renewable hydrogen. Projects like these require an integrated approach that bring offshore wind and onshore electrolysis together. The designation of additional offshore wind sites with export cables to industrial clusters is required to provide green electrons. And support schemes to bridge the cost gap between fossil and renewable hydrogen are essential to scale up, help drive down renewable hydrogen costs and preserve the competitiveness of end-users.

In a recent webinar hosted by the Renewable Hydrogen Coalition, Joël Meggelaars, Ørsted’s senior regulatory affairs and stakeholder manager for Belgium and the Netherlands, said “You can draw some similarities with where offshore wind was 10 years ago,” he said. “Visibility on volumes and tenders provided by governments helped to mature the supply chain and to reduce risks for investors. We call on governments to do for renewable hydrogen what they have done for offshore wind. And create a  roadmap for the build-out of electrolyser capacity. This will help to to make Europe  an attractive international investment hub for green manufacturing.”

While the SeaH2Land project and the envisioned Dutch-Flemish renewable hydrogen hub are still in planning stages, Ørsted is gaining first-hand experience with the construction of the latest of its nine renewable hydrogen projects in May of this year. The 2-megawatt demonstration facility at Avedøre Holme in Copenhagen will help Ørsted understand how to optimise the pairing of an electrolyser with variable  wind resources – something that will improve Ørsted’s grander renewable hydrogen ambitions. In that context, Ørsted is also developing a 100 MW elektrolyser project together with Yara in the same region as where it aims to realise SeaH2Land.

“[W]e know where we need to get, but to get to that scale and cost reduction, we need to start developing and constructing smaller projects today,” Meggelaars said. 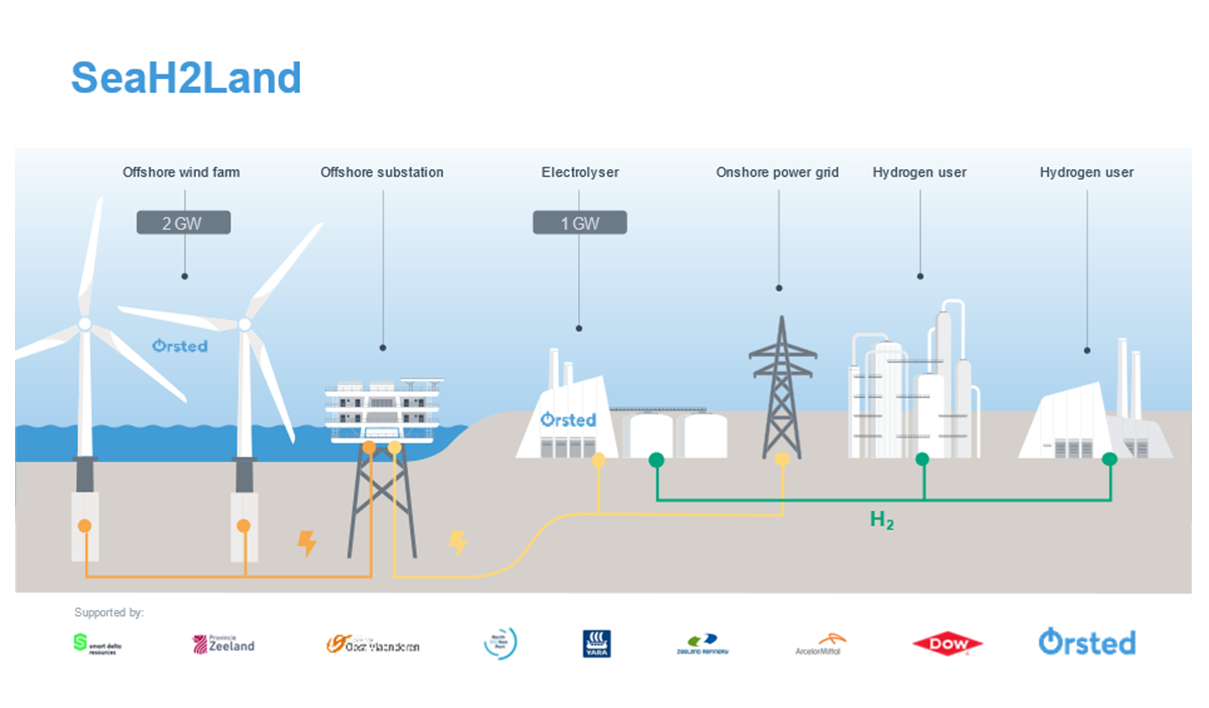